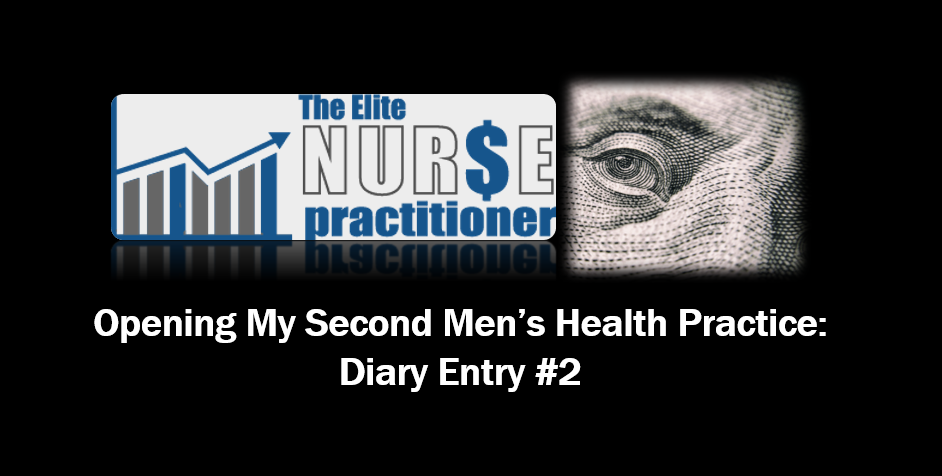 This is the second part of the chronicling of opening my second Men’s Health practice. As many of you already know, I am opening up a second practice location. I will be writing a series of “diary” articles to enlighten everyone on my progress as I enter these unclear waters. This will benefit me as it will help track my progress, but my main hope is that it will motivate many of you to get off your ass and get started building a niche side practice. I will also include little “tips” that I have learned along the way as I chronicle my journey.

If you are new to the party, here are links to the previous entries: Entry #1,

Alright, so its been 3-4 weeks since my first journal entry. Many of you might be wondering why? Well, starting a practice takes time, especially if you are working part-time and spinning off multiple businesses. In the last month I have released a new course, writing articles, helping my readers, and still seeing patients. I have been busy to say the least. Also, I have been waiting to finalize the lease for the new office. Lets start there.

Shortly after I published diary entry #1, the commercial realtor called me with bad news. She said the landlord had another offer on the same office from an established tenant. She stated that the other tenant was willing to sign a 3 year lease. Well shit… I told her never mind, I was not signing a 3 year lease, that could be financial suicide for a new business venture. If things go south, I would be on the hook paying $1200 a month for years… No thank you! So, I told the realtor that we can look at the other offices we looked at before or just look for another property entirely. She said “okay” and that she would relay the message to the landlord that the other tenant could have it and we would look elsewhere.

This bummed me out, but that is part of starting a practice, there will be multiple speed bumps along the way.

The next day the commercial realtor called me and said she had good news. She said that the other tenant backed out and that the landlord was still okay with moving forward but wanted to increase the rent to $1,250 if I was only going to sign a 1-year lease. Okay, fine! What is an extra $50 for a location that I liked? It would save me another trip looking for other offices as well…

Guess what everyone? I KNEW THIS WAS GOING TO HAPPEN. That landlord was full of shit. There was no one else looking at that office and willing to sign a longer lease. The office has been vacant for over a year… Some other person was also interested in the office at the same time as me? Sure there was… They were betting on me folding and signing a longer lease, then when I declined and said I was going to look elsewhere, that “other tenant” just MAGICALLY backed out. Ya right, what a coincidence…

Tip #6: Realtors and landlords are full of shit. They will bold face lie to you to get you to sign a longer lease or increase your offer on a property. This has happened to me multiple times in the past as well, personally and in business. If they call you saying “there are dozens of people looking at this property” or “we have multiple offers” don’t believe them. They care about THEIR bottom line, not yours!

I received the lease agreement, signed it, and got the keys a few days later (this was about a week ago). I decided to pay for 8 months in advance as I have had a good year with my Men’s Health Practice, so I wanted to dump some money before the end of the year to mitigate my tax obligations.

Tip #7: Have the end of the year approaching and you are sitting on some extra cash in your business? Pay your lease off for multiple months to decrease your “income” so you aren’t paying more in taxes.

After I signed the lease, I applied for my local business license online. This took a whole 15 minutes.

Tip #8: Business licenses, LLCs, tax IDs, NPI numbers, etc. usually don’t take long to obtain! You can get most of these things in a matter of an hour!

During this back and forth with the landlord over the past 3 weeks, I was also purchasing furniture and supplies for the practice. I have opened 2 brick and mortar practices in the past, so I have a general idea of what I need to get started.

In terms of furniture, I stuck to buying items off Craigslist, Facebook Marketplace, and a small used furniture store that specializes in reselling old hotel furniture. With a few searches, phone calls and a couple hours, I managed to fully furnish my practice. The total cost? $1,100! This included lobby chairs, a desk, small side tables, filing cabinets, office chairs, a bookshelf, and a few other little pieces of furniture. Not bad!

What about medical supplies? Well, with a men’s health practice you really don’t need that much. Most of the supplies you need are for giving injections and drawing blood. These supplies cost very little. I spent about $400 buying syringes, needles, ETOH wipes, gauze, etc… I also dispense medications out of the clinic, so I purchased about $300 in tadalafil, sildenafil, B12, dexamethasone, etc… All of these supplies should last me 3-4 months.

What about medical related equipment? The other good thing about men’s health is that you only need a vital signs machine and 1 exam table. THAT’S IT! I managed to find a decent vital signs machine off Ebay for $200. In terms of the exam table, I struck gold! I forgot to mention this in the first article, but when we were visiting multiple offices, one office had this really nice white leather exam table just sitting in the empty lobby. I asked the realtor if the landlord would be willing to sell it. She called him and he said I could take it. Are you kidding me?! This is like a $3,000 exam table… I told him thanks and I would remove it from the office for him.

Tip #9: You will never know until you ask! Never be afraid to ask for something. Another man’s trash could be YOUR treasure, and this free exam table saved me at least $1,000 because exam tables can get expensive.

Over the past 2-3 weeks, I was also searching for a medical assistant to work the office. I posted an ad on Craigslist and on Indeed. To my surprise, I did not receive many applications. I received about 15 applications in total. After reviewing their resumes, I narrowed it down to 5 quality applicants. The other applicants had unimpressive work histories.

Tip #10: Look at how many jobs the applicant has had and how long they have stayed at each one. If they bounce from job to job and work at them <1 year, throw the application away. As a small practice owner, you cannot afford to have headaches and unreliable employees!

So, I called these 5 applicants and scheduled interviews from 1-5pm on the Saturday afternoon I planned on being there to set the practice up.

With a garage full of office furniture, a small Uhaul trailer, and interviews scheduled, I was ready to go! I left last Friday afternoon and got there in the evening. I brought my sister (who I recently hired to help manage my practices) and two of her teenage children to help me set up the practice. We rented a small AirBNB for $150 a night to house us for the weekend.

On Saturday morning, we drove to the new office and started unpacking all the furniture and supplies. We had the place fully furnished within 2 hours. It looked pretty good.

Being satisfied with the way the clinic looked, I still had to go buy the electronics though! I did not want to move printers, computers, monitors, and a television 250-300 miles. Therefore, I drove over to Best Buy to buy 2 computers, a television, and a printer. They had pretty good deals on mid-range computers and a small 32in television for the lobby. The computers cost about $650 each and the television was $250. I still needed a printer, and Best Buy was totally sold out! Supposedly COVID has created a printer shortage because more people are working from home.

Tip #12: Do not be cheap when it comes to your practice’s computers and printers. It is worth paying an extra $200-$300 for a quality computer. Your practice will be dependent on those computers for scheduling, payments, documenting etc. If you purchase a cheap computer that runs slow and has issues all the time, it could really slow you down! Same thing for a printer. If it breaks down and you are out of consent forms, you are SOL!

I was fearful that I was not going to be able to find a decent printer! I had to have a printer for this office, it is not negotiable… I had to run to Office Depot next for office supplies anyways, so I was really banking on them having some. When we arrived there, I had my sister go get all the office supplies, such as staplers/paper/folders/pens/etc., and I went and looked at the available printers. They only had one business printer left and it was exactly what I needed. The printer was $300 and all the other office supplies came out to about $250.

It was noon by the time we got back from Office Depot, and the first interview was at 1pm. We ate a quick lunch in the office, and I received a phone call at 12:45pm from the first applicant. They could not make it because they were selling their house and wanted to reschedule. We rescheduled for Sunday at 9am. I am never impressed by someone who must reschedule an interview. What does that say about their work ethic in general?

So, with the first applicant gone, I worked on getting the computers, television, and the printer setup while I awaited for my 2pm to show up.

2pm came around, no applicant… Are you kidding me? I called them, no answer… Ugh… Alright, a no show… So I kept getting things put together in the office.

3pm came around, no applicant… You have got to be joking. I called, no answer… SERIOUSLY?

4pm came around, no applicant… WTF is going on… I called, no answer…

I called the 5pm applicant at 4:15pm and left her a voicemail saying she could come earlier. She sends me a text at 4:45 saying she got the voicemail and is on her way.

5:30pm comes around, still no applicant…. At this point I am furious, WHY EVEN BOTHER TEXTING ME SAYING YOU ARE ON THE WAY AND THEN DON’T EVEN SHOW UP!? I tell my sister we are done and let’s go grab a beer. I probably had a few too many secondary to my frustration…

I was hopeful the 9am Sunday applicant would show the next day.

9am came around, no applicant…

I have absolutely NO idea what happened with all the applicants. I have never experienced 5 people in a row not show up for an interview. I am paying this medical assistant $18 an hour, this is probably one of the highest paying medical assistant jobs in the state, and no one shows up? I question the work ethic of many people in this country sometimes…

So now my practice is on hold for at least another 2 weeks… That is fine. I can spend this downtime working on marketing, my operating procedure, and other tasks necessary for launching a successful practice. Stay tuned!